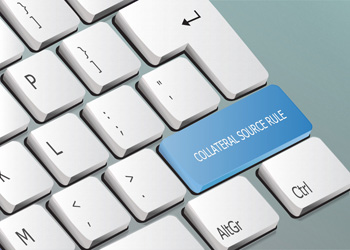 Does the Collateral Source Rule Still Exist in Missouri and Kansas?

The collateral source rule still exists but in a much more limited capacity. Now it only prevents defendants from introducing the source of the collateral payment. For example, a defendant can introduce evidence that out of $15,000 in medical expenses, only $5,000 was paid and the other $10,000 was adjusted or written off. The defendant, however, cannot introduce evidence of whether the plaintiff’s medical expenses were paid by private health insurance, Medicare, or Medicaid.

What Has Caused the Shift Away From the Collateral Source Rule?

Notwithstanding the foregoing, no evidence of collateral sources shall be made known to the jury in presenting the evidence of the value of the medical treatment rendered.

In other words, plaintiff can submit evidence of the medical bills actually charged by the provider before any payments or adjustments by health care providers, and defendant will present evidence of the bills actually paid. Health insurance companies have contractual agreements with healthcare providers to reduce or adjust their bills, and although plaintiffs typically pay for this benefit, plaintiffs may not be reaping the rewards of their purchase. Both numbers can be presented to the jury, and the jury decides which amount represents plaintiffs’ actual damages.

In Kansas, the Martinez v. Milburn Enterprises, Inc. case cut a hole in the collateral source rule. The Kansas Supreme Court held that a defendant is permitted to present evidence that the injured party’s medical bills were adjusted by a health care provider and the question of “reasonable value” of the medical expenses is a question of fact for the jury. Similar to Missouri, it has become a rebuttable presumption where both parties can put on evidence of the medical bills charged versus paid and the jury makes the ultimate decision.

How Has the Shift Had an Impact on Settlement Negotiations?

Since most cases do not go to trial, but rather settle through negotiations, this is the important question. According to our Kansas City personal injury lawyers, the answer is the shift has worked to an injured plaintiff’s detriment, because now insurance companies will make low-ball offers to injury victims who have the benefit of health insurance. The insurance companies feel comfortable taking their chances at trial that a jury will reduce a plaintiff’s compensation because an injury victim’s health insurance paid a portion of their bills and the rest of the bills were adjusted away, so the plaintiff has been made whole with the smaller amount. This has rendered health insurance a double edged sword.

If you have been seriously injured in a Missouri or Kansas auto accident due to someone else’s negligence, don’t hesitate to contact our experienced Kansas City personal injury lawyers at Castle Law Office for your FREE consultation to see how we can help you get the compensation you deserve for your injuries. Call us at 816-842-7100 now.